The Dodge Viper has captured the hearts and imaginations of sports car enthusiasts around the world. In fact, since the Viper concept debuted in 1989, the Viper has created more buzz and generated more interest than exotic sports cars that cost five times as much.

With engaging editorial and striking visual appeal, VIPER Magazine makes for the kind of high-energy reading that Viper owners and enthusiasts clamor for. 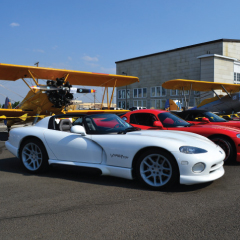 Vipers take to the air 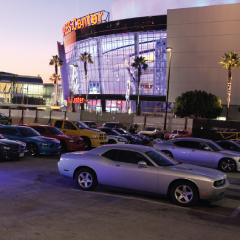 What a blast! I have to admit, I wasn’t totally pumped up when I heard VOI.10 was being held in Detroit—but I’ve never been so happy to be proven wrong. From the first-class accommodations at the Motor City Hotel, to the tour of the Conner Avenue Assembly Plant to our cruise along the Detroit River, the event was just one highlight after another.

My thanks to Dodge, the VCA and all the sponsors who made VOI such a success. I’m keeping my fingers crossed we see an announcement for VOI.11 someday soon.

I purchased my Viper (a 2003 convertible) about six months ago and while it has been a source of tremendous pleasure, it has also led to a lot of frustration. I mean, when I get to 70 mph in the first three gears, what am I supposed to do with the other three? The car wants to go, but I had to keep reigning it in. That was, at least, until the Viper Owners Invitational.

I can’t tell you how thrilled I was to be able to take my Viper out on the road course at the Chelsea Proving Grounds or on the drag strip at Milan. Finally, my Viper was able to do what it was meant to—go fast! I wanted to add, however, how much fun the Caliber SRT4® head-to-head challenge was. Those cars are incredible. I attached a photo my wife took. You don’t need a Viper to have fun—but it sure helps.

I’ve been to a number of Viper Owners Invitationals in the past, but for a number of reasons, I’ve missed the last few. So I didn’t really know what to expect when I came to Detroit for VOI.10. I know things haven’t been great in the auto industry in general and at Chrysler and Dodge in particular, so I was wondering if all the outside pressures would cast a pall on the proceedings. I’m happy to say the Viper Nation didn’t let me down.

The Viper ownership group is truly a special collection of people. You can put together all the racing events and banquets you want, but if you don’t enjoy the people you’re with, what’s the point? The people who own Vipers and drive Vipers are among the friendliest and nicest folks in the world. Being with them in Detroit made me realize what a mistake it has been for me to miss any of these special events. If there’s a VOI.11, let me know. I’ll be there.

Due to an editorial oversight, the Steering Angle column in the Fall 2008 issue of VM contained text that was not approved by Kipp Owen. VIPER Magazine apologizes for the error.

May the Force Be With You

There are a lot of reasons to go to VOI, but for someone like me who doesn’t like to race my Viper (my baby is too precious to subject to that kind of punishment), I find pleasure in other areas. The biggest kick I get is from seeing the hundreds of Vipers, in a blaze of color, all parked together in one place. I took this photo at the parking corral on Belle Isle before the Detroit Grand Prix and I think it’s a good example of what I’m talking about. Seeing these Vipers out in force sends a message to everyone who wanders by—there’s nothing like a Viper.

OK, I made it back home from VOI and have finally settled down into my day-to-day routine. There’s just one thing I want to know—when is the next one?

With all the uncertainty surrounding the auto industry today, it’s great to know that the Viper Nation can take comfort in two things: The Viper will continue to be produced for many years to come, and the organization known as Viper Days will not only continue, it will become bigger and better.

Those familiar with the history of the Viper know that Viper Days and the Viper Racing League have been part of the Viper legacy for more than a decade. These series, founded and operated by Skip Thomas, have literally helped thousands of Viper owners satisfy their need for speed, while also teaching them valuable lessons about how to safely handle their vehicles in any kind of driving conditions.

No one knows the value of Viper Days better than those who have participated over the past fourteen years, so a few months ago; several veterans of the series approached Thomas to see if he might be interested in turning the administrative reins of his series over to a new management group. That organization, led by Rick Girard, sought to acquire the rights to Viper Days and the Viper Racing League with plans to grow the series into one of the largest most respected amateur road racing series in the nation.

Rick Girard explained, “All the owners who have participated in Viper Days have the upmost respect for Skip and everything he’s done for us. After 14 years, we want to make sure that the driving and racing opportunities for the Vipers will continue for at least another 14 years. Somebody needed to step up and offer to take the reins, so I did.”

Through Girard and his investment group, Viper Days will become part of a larger enterprise that will encompass not only Vipers, but other makes, as well. They have formed the North American Road Racing Association “NARRA” and will sponsor three different series designed to accommodate every level of driver skill.

The first will be the Michelin Challenge Series, which is geared toward beginner and intermediate drivers. The method by which drivers will compete in this series is “timed laps,” which will judge their progress against others in their class. Second, will be the Hoosier Cup Series, which will feature Grand Touring and Grand Sport vehicles from a variety of different manufacturers. Finally, the Viper Racing League will be reserved for the most experienced drivers, who will race wheel to wheel with each other. To date, 19 Viper Racing League drivers have turned pro and raced many well known series such as the SCCA World Challenge and the Grand Am Rolex Sport Car Series.

Driver education and safety will continue to play a big role in both the Challenge Series and the Viper Racing League, according to Girard. “Skip did a great job of creating a safe environment for us to learn how to handle the most competent road racing car on the track, the Viper.

“Our updated business model will offer a wide variety of track opportunities to a diverse group of automotive connoisseurs, including other brands such as Porsche, Corvette, Aston Martin, Mustang and Ferrari” Girard continued by saying, “Many people who purchase high performance cars are intimidated by the idea of taking them to the track. Viper Days will give those folks the chance to learn about what their cars are capable of without the fear of deadly consequences.”

Girard hopes that Viper Days will expand its offerings to include events for the entire family. “Our young driver program will be an ideal place for teenage drivers to learn a variety of skills such as; threshold braking, skid control and how to avoid overcorrection in the event of an emergency. We’ll also include other activities such as tailgate parties, car shows, and live auctions—something for everyone.”

Plans call for nine or ten events in 2009. “We’re still working on venues and track dates for next year, so our schedule is not finalized at this time, however, we will be going to some of the most famous tracks in the world, places like Sebring, Mosport and Homestead.”  Girard said.  Please visit www.viperdays.com or www.narraonline.com over the coming weeks to see our 2009 schedule and keep informed on our progress.”

Girard concluded, “This series became too large for one person to handle. Even though our group is taking over where Skip left off, he will remain with our new group as the Grand Marshall of all events. Knowing Skip, I think you’re going to find him wanting to return to his teaching roots. Heck, don’t be surprised if he climbs into your car, turns to you and says ‘Hi, I’m Skip, now let’s go 120.’”

Change, change and more change. As I write this gas prices are plummeting, the Big Three auto manufacturers are in a financial turmoil, the economy is on a roller coaster (which part remains to be seen) and a new U.S. president will soon be in office. Closer to home, the Viper Club of America has a new roster of National Officers and the entire Viper platform is up for sale by Chrysler. The Viper faithful and America as a whole seem to be holding their collective breath.

I let my breath out a while back—at VOI.10 in Detroit to be exact. Along with the other VCA officers, we met with everybody from the craftspeople at CAAP to the SRT® marketing folks to the executive ranks of Chrysler itself. In a time of turmoil you could not find a more dedicated group of people committed to the preservation of the Viper platform as a whole.

Like all of these groups, the VCA is firmly committed to seeing the Viper legacy continue for many years to come. To that end the VCA has teamed with Viper Marketing to offer a special referral program exclusively for VCA members—you can read more about it in this issue. The idea is to clearly demonstrate just how strong the Viper platform really is, even in times of turmoil. There is certainly no better time to get your hands on the latest and greatest Viper built to date.

The simple fact is that the Viper is America’s one true exotic muscle car: A hand-built, limited production, federally-certified supercar capable of speeds around 200 mph straight from the factory. Far smaller countries like Italy can support two such manufacturers. The UK and Germany have their own as well. America has only one that truly fits all the criteria and that is the Viper. It demands respect in every automotive circle and doesn’t blush when tracking with the Italians and their counterparts.

The legacy is for sale. With proper nurturing and expanded marketing efforts, the platform will exceed the wildest dreams of even its new owner. America is the birthplace of the muscle car and the Viper represents the pinnacle of the breed. Hundreds of thousands of potential Viper owners are out there just waiting to be found. Many, like most of us did, will take that obvious next step up to the Viper from the mass produced sports cars built in Dearborn and Bowling Green.

One thing is for certain: The Viper legacy will continue regardless of who owns it or what they choose to do with it. And the Viper Club of America will always be there to support that legacy for decades to come. You can count on it. 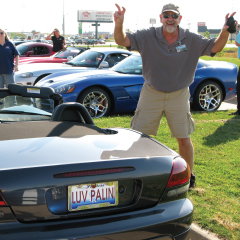 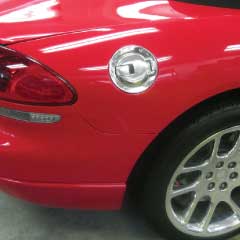 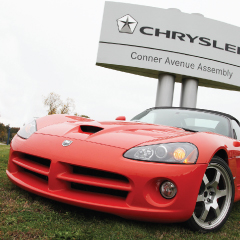 From the first issue of the Viper Quarterly in 1995 through 2011 editions of VIPER Magazine, you can order one of the few remaining sets of poster-size magazine covers.